Last weekend, 10 Languages International students and 4 teachers went on an Interactive Maori Culture Weekend, hosted by the Piritahi Marae on Waiheke island and organised by our friends at TimeUnlimited. It was an amazing, uplifting, action-packed yet relaxing weekend that I think we’ll all hold as a memorable, unique experience for a long time to come.
Here are accounts of some of the activities, as remembered by students:
Flax Weaving 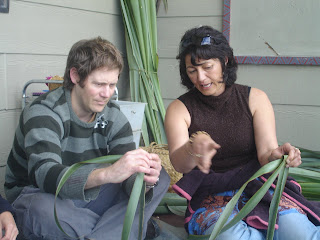 During our time at the Marae, we were given the opportunity to flax weave [Harakeke] It is a traditional craft of the Maori people, handed down from their ancestors. It has a long history and in former times the hand-made baskets were used to carry food, belongings or treasures.
Firstly, we were shown how to collect the flax stripes. What impressed me most was the attitude the Maori have towards nature: you never take anything without giving something back. Therefore we cleaned the bush of weeds and thanked Mother Nature for her rich gifts before cutting the outer parts of the bush.

The actual weaving was done with 3-day-old strips, which are more flexible and pliable. A lot of patience is a must – especially in the beginning, but I instantly began to enjoy the calming feeling when doing no more then centering on my hands and the flax.

In the end I created 3 Flax Flowers and a little basket I could take home with me, and was very proud of my little treasures.
by Melanie Zaugg.
The Waka 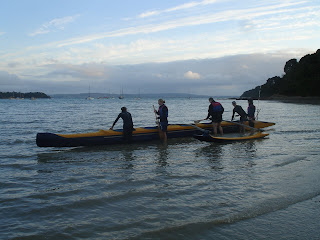 The weather was great and the sun was shining on Sunday, so that one activity we could join was a Waka tour on the sea. This boat with six seats has been used by Maori as a transport vehicle during battles and is still used today.

After our guide had said a Maori prayer to the God of the sea to ask for protection, we left the beach. The rowing wasn’t as easy as I’d expected and the good timing of the whole group was demanded. Because the boat wasn’t that big, its speed depended on the rowing on every single member of the crew. If somebody was out of rhythm, the boat didn’t float smoothly anymore. Although we had to work hard to move on we enjoyed the trip. Every time when there was time for a rest we admired the delightful view of the sea and it felt like holiday. 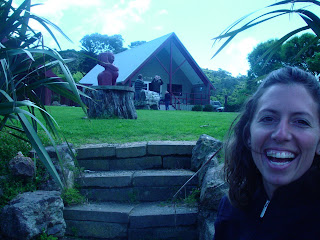 The accomodation on the Marae was situated next to the beach, which was excellent and beautiful. The wharenui, where everybody slept was quite big. After putting all the matresses in order, there was still enough space for all the luggage. But don’t forget, there were some strict rules.

Firstly, don’t bring any food into the wharenui.
Secondly, women and men have to sleep separately.
Thirdly, put your shoes off in front of the door.
Personally, I slept really well in my sleeping bag until I woke up during the night. There was a terrible noise! Was there maybe anyone snoring? So be careful. If you want to have a restful and peaceful night, don’t sleep in the same room as Tom the teacher!
Anon.
This entry is tagged with: News, Social Programme, Student Life in New Zealand, Written by our Students