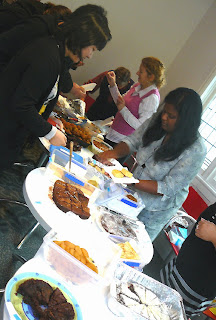 This morning, Languages International hosted a morning tea for students and staff as a fundraising effort in support of the New Zealand’s Biggest Morning Tea campaign. Staff and students alike gave generously to the charity . Many baked and others contributed ingredients. One particularly generous student, Khaled Nadeem from Saudi Arabia, even baked three cakes using delicious Saudi Arabian recipes.

The scrumptious results of all this baking were sold in the student lounge. Students lined up to support the cause by enjoying South African Chilli Bites, Russian Blini, Italian pizza, and a feast of cakes and sweets based on recipes from around the world. In fact, the assortment of food available was almost as varied as the mix of nationalities represented at the event, all eager to contribute to the strengthening of our communities.

Despite the large number of staff who pitched in to serve the food and collect donations, the queues still stretched out the door. The money raised at Languages International will be used together with the contributions made at other morning teas around New Zealand to provide a crisis helpline.

You can see more photos of the event on Flickr.

This entry is tagged with: Auckland, New Zealand, News

Ride the Segway with Languages International