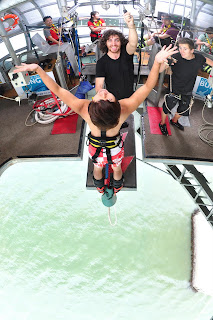 One day, I discovered some brilliant news via the weekly social program at our school. That was bungy jumping on the Harbour Bridge. I have already done it 4 times. However, I had never tried bungy jumping on the Harbour Bridge. I had no doubt about doing it, so i didn’t hesitate to book this social program. It was quite expensive but compared with others, I firmly belive that it was inexpensive.(105$)
After class at 3:30, finally 10 jumpers except the teacher came in front of building 27 (reception). there was a grey van for us. We took the van and while we were arriving at the Harbour Bridge listened in silence to the explanation about what we were going to do.
When we arrived in the office, we had to decide whether we wanted to purchase our bungy jumping photos or DVD, we had to prepay for it. After that we filled in a simple information sheet and we put on the safety suits and helmets. Unfortunately, it must have taken about 10 minutes to walk to the middle of the Harbour Bridge. There was a narrow bridge between the Harbour Bridge and the sea.
In the end, we arrived at our destination. There were two staff who explaned the method of bungy jumping. Because most amateur jumpers didn’t know when they are reaching the water, they should stretch their arms. It protects us from bruising by the surface of the water.
We started jumping, from heavy person to light person. In my opinion, we were like professional jumpers, due to the fact that nobody hesitated when we had to bungy jump. In my case, I decided to backward jump because it makes me feel extremely excited. When I finished the three bounces, something quite strange happened. When the bungy jump has finished, jumpers usually take off their safety suits on the floor. However, when I finished the bungy jumping, the instructor was pulling me back up when I was hanging upside down.
By the way, it was another awesome experience. I’ll remember bungy jumping when I’m crossing the Harbour Bridge.
PS. Attention, someone who likes fishing near the Harbour Bridge! If you find a NEW BALANCE shoe, please call Languages International because one of the students lost a NEW BALANCE shoe.

By awesome SHANE, a student at Languages International

This entry is tagged with: Auckland, New Zealand, News, Social Programme, Written by our Students

Have You Ever Been to the Coromandel?