Last weekend I was traveling with two of my friends Alexandra and Svetlana. We took a winery tour with Kiwiana Tours. After the wine tasting we went to see the black sand beach at Muriwai, on the west coast of the Auckland region. When we had arrived, the door of the bus opened and I could feel the inexpressible smell of the sea.

Then we got of the bus and started to move, breathing in the fresh sea air. When we got to the edge of the cliff we could see the fabulous sea shore with the black sand. I felt like I was standing at the end of the rock cliff. The warm wind was blowing through my hair. The view from the top was mysterious; I had never seen such a colorful place before. I stayed to admire the view for a few minutes watching the sea shore, and the amazing hills covered by different kinds of grass and plants. I had a feeling that in this place merged all shades of green, brown, ocher, black, white and blue. We stood there for some more time and then went to a viewing platform on the top of the nearest hill. 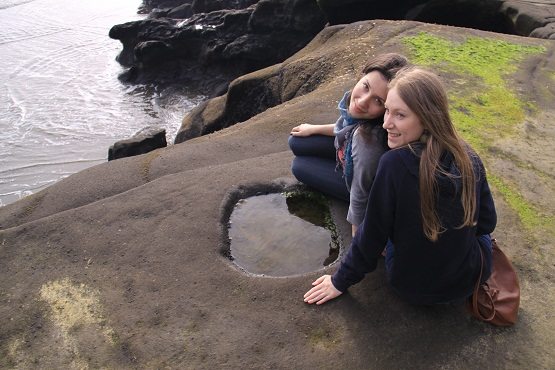 From the viewing platform we could better see the shore and the people near the water. There were many people around. Some of them were going to the sea between the big rocks or along the sandy shore down below; some of them were getting ready to surf. I think many people came here to enjoy sports activities and play some interesting outdoor games because a few children were playing ball with their families. I think this is a very interesting and successful type of weekend for a whole family when you can go to an attractive place by the sea to enjoy nature and spend your time with the relatives. Near us was another kind of people – tourists. They were looking at the spectacular view and taking photos. We also took a lot of beautiful photos of ourselves and then I saw a man who was preparing to paraglide on one of the cliffs near us and I took some photos of him.

Afterwards, we went to the other side of this masterpiece of a hill, where was another viewing platform. The first thing I could hear were the birds. We could see there was a unique kind of bird – gannets. These birds do not stay on the cliff for the whole year. They return in July and their chicks hatch by November. Besides the gullet colony many seagulls live near the sea, especially black-backed gulls. These birds live on a small rocky island called Motutara that we could see from the top of the hill. Sometimes, it looked like the whole island was covered by all kinds of different birds. Many birds were whirling round this small island and making some characteristic sounds. We were looking at this united colony and could not stop admiring these birds. 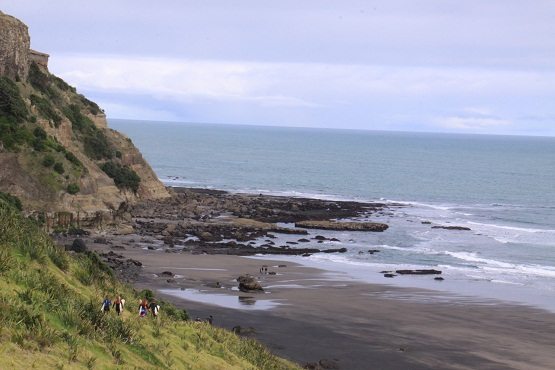 Then we got down the hill using the wooden stairs that curl like a snake on the yellowed grass hill. When the stairs ended we found ourselves in a wonderful place – we were on a big rock platform and could see blue sea waves crashing against the stone base of a cliff. Warm wind brought the strong smell of the sea to our nostrils.

On the left there was one big cave in a cliff. The water was going through the cave and appeared from the other side near the “bird island”. It was too dark in this big cave to see whether there was anything interesting in there or not, but we could not go in there because we were afraid of getting wet. We enjoyed the best view of the sea I had ever seen and then started to go to the sandy shore through the stone ridges.

When I reached the shore and could feel the wet sand under my boots it was an inexpressible feeling. We walked for some time along the beach and admired the long shore of black sand. The black sand was bathed in the sunshine and at the shore it merged with the blue water and the white foam to look like one single thing. I was very impressed with this place. I think that Muriwai is the best place to spend time with the family surfing, swimming, camping, fishing and horse riding.

This entry is tagged with: News, Student Life in New Zealand, Travel

Dyslexia in the workplace